A successful “continuity promotion” which John put together for newspapers.

One of the more successful “continuity promotions” which John put together for newspapers during the early ‘90’s, was a Disney Door Hanger Collection.

The Sun Herald newspaper in NSW wanted a concept designed for families, whereby an artificial stimulus was created for purchasing the paper regularly each weekend.

John worked in conjunction with the Walt Disney Company, to produce a series of 10 Door Hangers, numbered 1 to 10 in the series. On the launch day of the three week promotion, the newspaper gave away a free Door Hanger, which was inserted into the publication.

Also, on this launch day, the Sun Herald promoted the rest of the series, with readers being told that in order to gain the entire set, they needed to clip a coupon from the Sun Herald each week and present it to their local newsagency together with $2.75 for each Door Hanger. (Readers could collect up to 3 Door Hangers each week at $2.75 each).

Door Hanger themes included all the Disney favourites, such as The Jungle Book, Little Mermaid, Rescuers Down Under, Peter Pan and Winnie the Pooh. For families with 2 or 3 children, this was a huge hit, as they could satisfy all of the little ones with a few Door Hangers each.

Over the three weeks promotion, the newspaper reported a lift in circulation of over 4%, with John selling in excess of 100,000 Door Hangers…….not a bad feat in just three weeks!

As with other promotions of this type, John underwrote the concept and entered into a “commission-based” arrangement with the publisher. With the success of this and other Disney themed newspaper promotions, John certainly believed that if one was looking for a “family themed” promotional technique to stimulate sales, it was hard to go past the Magic of Disney! 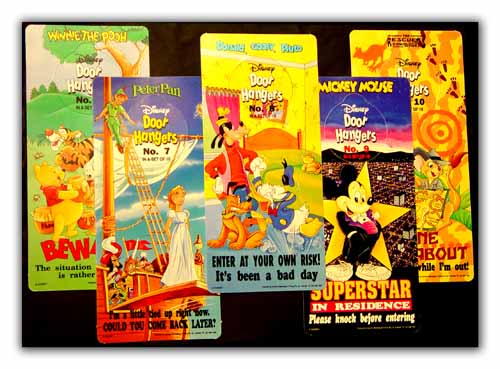