John worked collaboratively with the Nine Network to accrue over $1 million in prizes!

The story goes like this. The NINE Network was concerned about its 6pm News Bulletin, as the SEVEN Network had eclipsed it for the very first time during the Olympic Games.

NINE’s supremo, Kerry Packer was not happy and instructed Senior Management to find someone to produce an innovative ratings stimulus which would “wow” Australian viewers.

Therefore, John was contacted and invited to visit the NINE Head Office in Sydney, where he was briefed on the challenge and asked to produce a concept in record-time. The NINE Network wanted to hit back at Channel SEVEN immediately after the conclusion of the Olympics and as a result, John had a mere 2 weeks to conceive and produce any “wow factor” marketing concept!

The belief was that Channel SEVEN would come off the back of the Olympics with a lot of confidence and would not be expecting a counter-attack for prime time viewers from either of the other two commercial networks.

John was of course sworn to secrecy and quickly started working on a repetitive viewing related promotional concept, which would involve letterbox distributing 3 million Game Cards along the East Coast of Australia and inviting householders to watch the 6pm nightly in order to view the call-routine.

John devised a Bingo-related format because of it’s massive consumer appeal and suggested to NINE’s Management that they open the purse-strings in terms of prize giveaways. And that they did!

Together with some help from participating sponsors, the Network worked collaboratively with John to accrue over $1 million in prizes! These giveaways included a fully furnished and landscaped Gold Coast home, Toyota cars, televisions, video recorders, overseas trips and cold-hard cash! In short, the $1 million prize booty certainly had Wow Factor!

The title for the promotion was “Channel Nine’s Big Winners Game”. Just over 3 million Scratch Game Cards were distributed along the east coast of Australia within a 48-hour period and the promotion was heavily publicised in newspapers and of course, on Channel NINE. 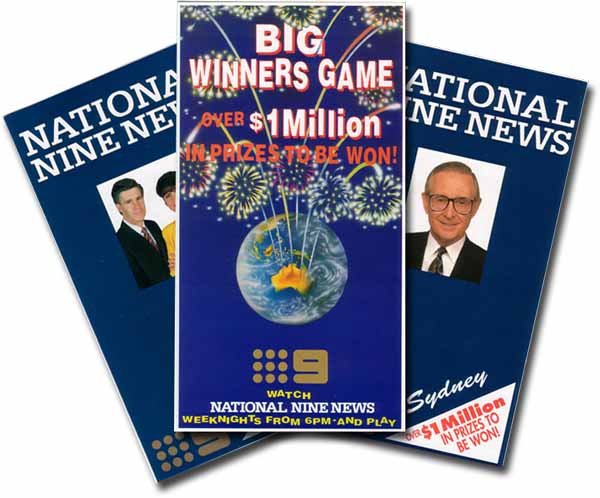 3 million of these game cards were letterbox delivered along the east coast of Australia each time. 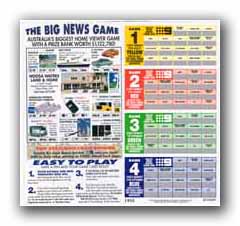 Viewers had to repetitively watch Channel 9's news for the nightly call routine - To find out what panels to scratch.

Householders had 4 weeks worth of Scratch Games on their Game Card and were invited to watch the evening news each weeknight of the 4 weeks, in order to view the “call-routine”, which was screened in one of the advertisement breaks during the news.

If a householder found any of the “call-routine” on his Game Card, he needed to scratch the panel and reveal a prize symbol. The object was to reveal three of the same prize symbols during the game to win that prize.

Needless to say, by mid-week during each of the 4 games, most players had two of the required three symbols for a number of prizes, hence the size of the viewing audience for Thursday and Friday night bulletins was even further enhanced.

Make no mistake, the title for this marketing concept was very appropriate, as there were lots of “Big Winners” as a result of the promotion, the largest being the NINE Network!

As a result of John’s “Big Winners Game”, during the first few days of the promotion, NINE’s 6pm Bulletin with Brian Henderson, jumped to 41 rating points, creating a world record ratings lift which has not been surpassed even today.

NINE’s 6pm News Bulletin ratings for the 4 week period averaged out at 36 ratings points, setting a landmark which is probably never to be reached again on Australian television for a news program.

John’s concept proved without a doubt, that even television program audiences could be enhanced with marketing concepts, as long as the concepts have the all important “wow factor” and mass-participation appeal. 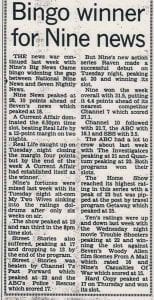 The press all around Australia made a big deal of this innovative viewer stimulus. Click here to enlarge the story 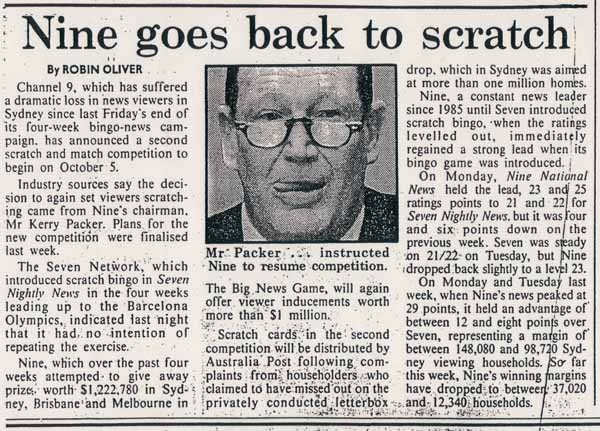 The press all around Australia made a big deal of this innovative viewer stimulus. Click here to enlarge the story

The promotion was so successful that the SEVEN Network tried to counter-punch with their own less attractive Bingo Card promotion, with Game Cards only being distributed through the Woman’s Day magazine (a much smaller audience than letterbox delivering to the East Coast of Australia).

Channel SEVEN’s attempt to win back the news ratings failed as NINE engaged John’s services to produce a second promotion that simply out-foxed the inferior Network SEVEN version. The secret was in John’s unique computer numbering system, ensuring that participants were on the edge of their seats each night! NINE once again blitzed SEVEN in the news ratings and folklore has it that SEVEN decided against any further promotional initiatives down this path, knowing that NINE would counter with a bigger “wow factor” each time.