In the early 90’s, KFC enjoyed a close licensing relationship with the Warner Bros Company, utilising both the popular Warner Bros cartoon characters and the Studio’s movies, as themed premium incentives for Combo Meal Deals.

Late one Friday afternoon, John received a frantic phone call from Warner Bros and KFC, explaining that a planned toy premium offer had fallen over, due to the manufacturing of the premium being delayed in China.

John was given the challenge of coming up with a consumer premium idea to replace the promotion that had been thwarted, with the added pressure being that 400,000 premiums needed to be at KFC outlets within 15 days!

In short, virtually an impossible task given that KFC and Warner Bros both had high quality-control values, which they understandably insisted on maintaining. A pretty daunting challenge indeed – John needed to come up with an attractive premium which would sell chicken but at the same time be able to produce 400,000 units within two weeks!

After burning the midnight oil and tossing around numerous ideas, John worked feverishly with his Art Department and print sources – and miraculously present a fully costed creative concept to Warner Bros and KFC first thing the following Monday morning!

Because of the timing of the promotional window, John believed the perfect premium would be a 12-month Looney Tunes Calendar, featuring all of the wacky cartoon characters, plus a series of perforated “coupon offers” for each month. 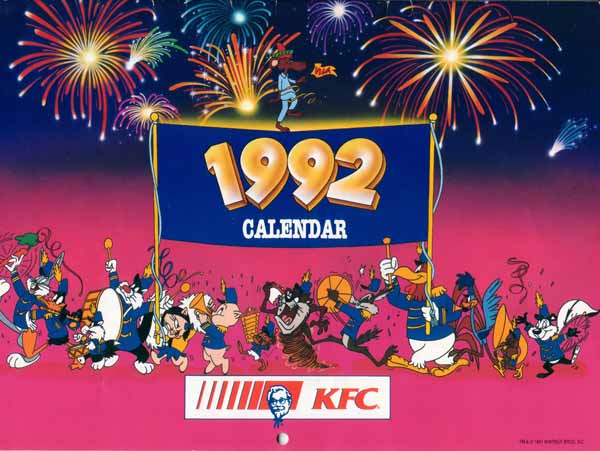 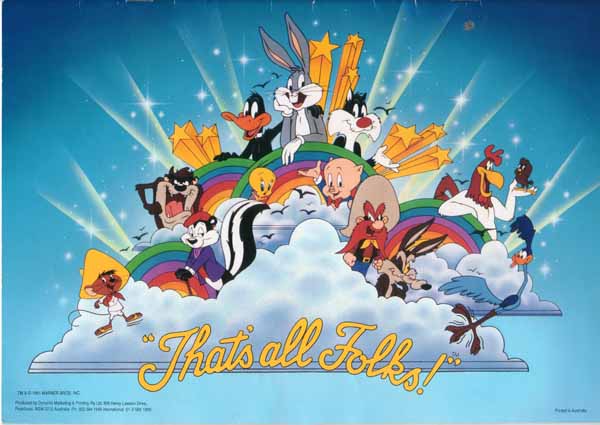 1992 KFC calender front and back cover.

The Calendar would be produced in an A4 landscape fashion on high quality gloss paper stock, giving it a high perceived value as a free gift with the KFC Combo Meal Deal.

Both KFC and Warner Bros immediately loved the idea and John then proceeded to meet the challenge of producing 400,000 such calendars within 2 weeks! His Art Department worked day and night for many consecutive days with his chosen printer doing likewise thereafter, keeping in mind that every step of the way, both KFC and Warner Bros needed to approve the various stages of artwork, thus introducing a further component to the production process.

Nonetheless, with half a day to spare, all of Australia’s KFC outlets received their quantities of the Looney Tunes Calendar giveaway premium, with national television advertising heralding it’s launch!

The result was nothing short of staggering! The KFC Calendars were such a hit with children and families, an urgent re-print was necessary just 2 weeks into the planned 6 week promotion!

What was essentially a quickly conceived substitute promotional concept for the originally planned toy premium, ended up being a smash hit! Indeed, the stimulus to the KFC Meal Deal was so great, that the Calendar concept became an integral part of future marketing plans.

Furthermore, the monthly discount coupons throughout the Calendar further enhanced the promotion’s success, as these offers provided KFC outlets with on-going repetitive traffic throughout the entire year.