John was asked by the NBN and WIN Television Networks to consider promotion/marketing concepts that would stimulate repetitive viewing and loyalty.

John met with Senior Executives and understood that aside from specific programs having strong audience loyalty, the advent of remote controls meant that viewers could easily “surf” from network to network. (Whereas in the good old days, “couch-potato syndrome” tended to mean that the evening news delivered an audience for the rest of the night.)

For a long time, John had an idea in the back of his head for a concept that “rewarded” viewers for supporting one television network. The trouble was that unlike “frequent flyer” programs with the airlines, there was seemingly no way to fund the viewer rewards for such loyalty.

Promotion was heavily marketed on the NBN and WIN networks via explanatory TV commercials.

That was until now!

John put forward an idea to NBN and WIN, called “The Frequent Viewer Rewards Program” where viewers would actually gain points for proving that they watched certain programs – and those points could be traded for special NBN/WIN branded rewards.

John’s concept was very simple. Over 3 million Frequent Viewer Passbooks were letterbox distributed to homes along the East Coast of Australia, (in NBN’s and WIN’s coverage areas), with these booklets explaining the Frequent Viewer Club details:

1. Viewers simply watched the network between 4pm and 10pm each night.

2. In the Frequent Viewer Passbook which was letterbox distributed, each day throughout the promotion was identified with a different trivia question being denoted for each hour between 4pm and 10pm. (e.g. What show did Henry Winkler (Happy Days) co-produce? 1. MacGyver, 2. Equaliser, 3. Quantum Leap?)

3. At some time during each hour between 4 pm and 10 pm, the correct answer for that hour’s question would appear on the screen and viewers would simply mark the answer in their Passbook.

4. Once the viewers evening was completed, they simply registered their points by phoning a special 1900-line and having received a personal PIN number on their first call, registered their points for correct answers. (Thus, verifying their viewing for that day.) Registration had to occur before 8am the next day, to avoid the “water-cooler swapping of answers” at work!

5. Upon accumulating reward points for viewing throughout the promotion, viewers could trade for specially produced items such as apparel, 60-Minutes watches, office equipment and other branded items such as stationery. 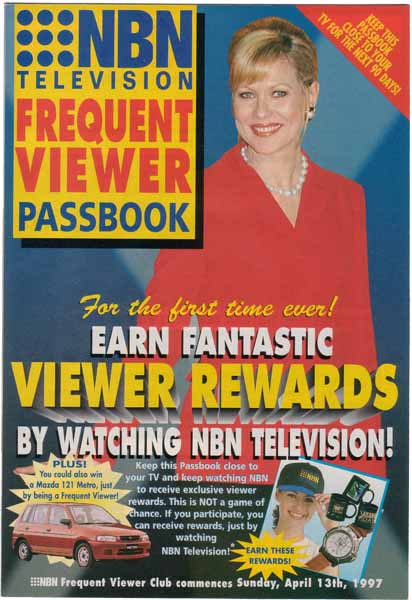 3 million of these game cards were letterbox delivered along the east coast of Australia.

The inside pages of the Frequent Viewer Passbook provided householders with all of the details on how to gain points and what they could reteem them for.

A proportion of the 1900 phone revenue funded these rewards, but viewers were left in no doubt that whatever their phone costs were, the reward item was worth considerably more.

On the Sunday launch night of the promotion, NBN’s 6pm News Bulletin reached a record ratings level, one which has never been eclipsed.

Indeed, the phone response from viewers “logging-in” to record their points was so great, that Telstra had problems in handling the overload. Unfortunately, the response was so big at bedtime, that Telstra’s Networks in certain areas actually crashed!

Nonetheless, the promotion was an outstanding success for both NBN and WIN in terms of ratings increases. And programs between the 4pm and 10pm mark achieved significant lifts in audience numbers throughout the 3 month promotion.