By using a Disney poster and stickers, circulation was increased remarkably.

One of the many “continuity promotions” which John designed for the News Limited company during the early ‘90’s was the amazingly successful Magical World Of Disney poster and sticker series.

Understanding that Disney was a household name, particularly in the “young families demographic” which newspapers were targeting, John put together a concept that involved:

1. A wonderful Disney poster, featuring scores of loveable Disney characters, with key-lined spaces around its perimeter for collectable stickers to be placed.

2. A wonderful Disney poster, featuring scores of loveable Disney characters, with key-lined spaces around its perimeter for collectable stickers to be placed. 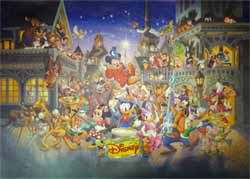 Glorious Disney wall poster, combining all of the Disney favourite characters on the one poster for the first time ever!. (Click for PDF version.)

This promotion was run with the Sunday Telegraph and Daily Telegraph newspapers in NSW, The Herald-Sun in Victoria, The Sunday Mail in Queensland and other News Limited publications in South Australia and Western Australia.

Like all “part-works” promotional concepts, the launch of this promotion in each newspaper was via a free giveaway of two Disney stickers, which were of course, part of the overall series which fitted around the perimeter of the Wall Poster.

These free stickers were on a “carry-card” which contained a photograph of the Wall Poster, together with full details of how to get the $3.95 Poster at newsagents. In other words, the “free stickers” were a massive sampling of the real thing, acting also as a major “tease” for the collection of the whole set.

As you can imagine, hardly any child could get these two free stickers from the newspaper and not pester Mum and Dad to then purchase the $3.95 Wall Poster from their local newsagent! It was a classic case of using “pester-power” to sell newspapers and worked like a dream for all parties. 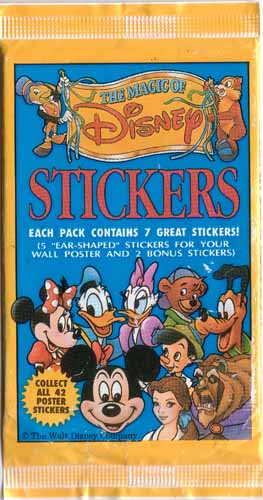 Stickers were presented in a polypropylene packet.

The promotion ran for just over 3 weeks in every publication, with the newspapers publishing extra “bonus tokens” at the end of the promotion, to pacify those consumers who had unfortunately missed out on 1 or 2 tokens throughout the promotion.

The result for both the News Limited newspaper group and for John was outstanding. The various newspapers reported increases in circulation of up to 7% (which is massive in newspaper terms) and sales of the Disney Wall Poster exceeded 100,000 units! (Given that the biggest selling Wall Poster in Australia up to this point, was a Madonna image which sold just over 15,000 units, this result was stunning).

Additionally, a staggering 2 million stickers were sold throughout the promotion, easily surpassing the results of any similar promotional exercise before it! And of course, the Walt Disney Company was understandably pleased with the result, because aside from the massive publicity its characters received, its royalty cheque from John was pretty handsome as well!

Indeed, the promotion was so successful, that John was invited by the Disney Company to produce another Poster/Sticker product. He accepted the invitation and negotiated the license to do so, producing another spectacular Poster/Sticker combination within the next 2 years. 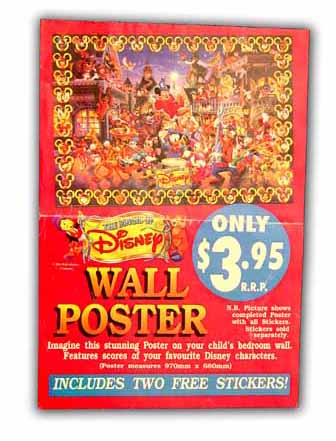 Point of sale poster at newsagent

Disney stickers which were part of the collection. 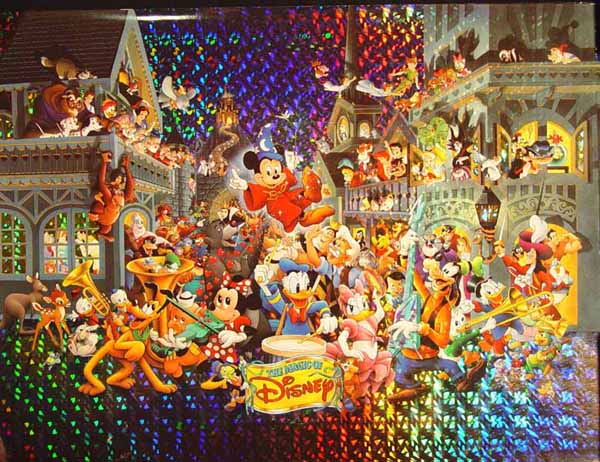