As a result of the success of John’s “Magical World of Disney” posters/stickers concept, he was asked by Australian newspapers to consider providing them with another Disney-themed circulation stimulus.

Therefore, working closely with the Disney company in Australia, John created a “Disney Villains” poster and sticker series which he provided to newspapers around Australia.

Identical to the execution of his other “part-works” promotional concepts, the continuity promotion was launched via an initial sticker giveaway in the Sunday newspaper with the rest of the sticker series being collected via newspaper coupons and redemptions at newsagencies.

The result for both John and participating newspapers was typically “Disney-esque!” In other words, it was an outstanding success, with both parents’ and children’s’ appetites for anything Disney continuing to be insatiable.

And little wonder why – the artwork for both the collector’s edition poster and stickers was absolutely stunning, with all of the Disney villains from multitudes of movies featured on the one wall poster.

It appears that everyone still loves “a baddie!” 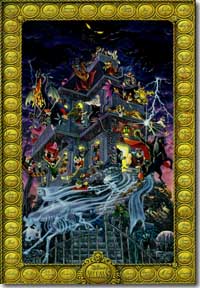