The Newcastle Knights NRL Club approached John during the late 90’s, requesting Marketing assistance, particularly with its Merchandise Division. Because the Knights did not have a Licensed Leagues Club, the Football Club did not gain revenue from the profits of Gaming machines.

Therefore, it needed to be extremely efficient at raising revenue through other means, the likes of sponsorship and merchandise sales. (Aside of course, from “gate takings” at Home Games).

John worked closely with Chief Executive, Ian Bonnette, to research the attitudes of fans towards certain merchandise lines and then analyse the potential for the Club, should the Merchandise Division be expanded. The year prior to John’s involvement, the Club had an annual revenue from merchandise sales of around $300,000.

John recognised that in order for the Knights to sell more merchandise, three things had to happen:
Whilst his teddy bears were being produced in China, John “hit the road” and sold the “Adopt A Teddy” promotional concept to dozens of shopping centres throughout Australia. He explained to shopping centre managers that the concept was a derivative of the enormously successful Macys Christmas Bear promotion in the U.S. and that its “huge female appeal” was a winning ingredient.

1. Better and more professional sales outlets needed to be installed at Home Games. (Up till this point, merchandise was sold from the traditional poorly decorated caravan).

2. The Club needed to form a relationship with a major Newcastle media organisation, in order to create “noise” for its merchandise range.

3. The Club needed to make the Newcastle Knights merchandise more accessible to fans, rather than t-shirts and caps being available only at Home Games.

In order to achieve these three aims, John put forward recommendations to the Knights Management and Board, supported by analysis and “predictive modelling”.

He highlighted to Management that whilst the Knights were heavily supported “in spirit” right throughout Newcastle and the Hunter, less than 4% of the total Hunter’s population attended Home matches each season (i.e: average home game crowd of 18,000 was only 3.2% of the 550,000 population of the Hunter). Therefore, 96% of the entire population of the Hunter were left “wanting” if they desired to purchase a Knights supporters item.

Click to Enlarge The Knights Management and Board gave John the go-ahead to move forward and he quickly negotiated a major business relationship with NBN Television, which provided the Knights with a huge amount of television exposure for it’s merchandise range. Secondly, he assisted in the negotiations for a Knights Kingdom Supporters Store to be opened in the main street of Newcastle, very close to the Knights Administration Office. He also helped negotiate a lease for a further Knights Kingdom Retail Store in Charlestown Square Shopping Centre, the premier Shopping Mall in Newcastle.

NBN television advertising was supported by Direct Mail brochures, which were distributed to fans at games and letterbox dropped to Newcastle homes. Additionally, Radio Station 2HD further supported the merchandise push by providing contra-advertising on-air, in return for some merchandise give-aways.

In short, John orchestrated not only a new stream of distribution opportunities, but also the vital “media noise” to drive sales! 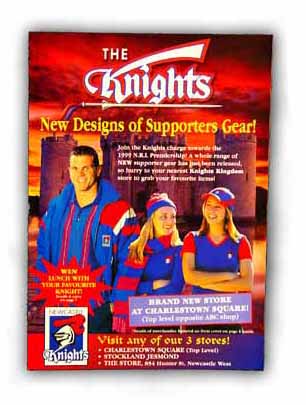 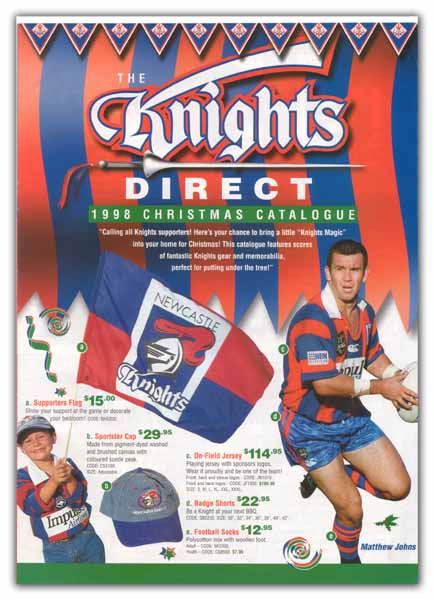 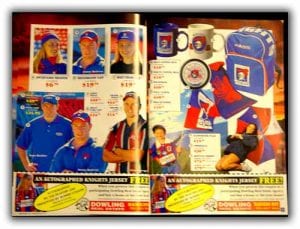 The result was that during the first year of John’s involvement, The Knights annual merchandise revenue rose from $300,000 the year before to over $1.3 Million dollars! Gameday takings rocketed to three times what they were previously, due to having more outlets at games and having such outlets appropriately themed and staffed.

John simply introduced the conventional retail “event formulas” to a business that traditionally sold t-shirts and caps to fans every fortnight during the winter footy season.

In short, John provided analytical and strategic advice, sprinkled with a touch of “wow factor” – and the results speak for themselves! 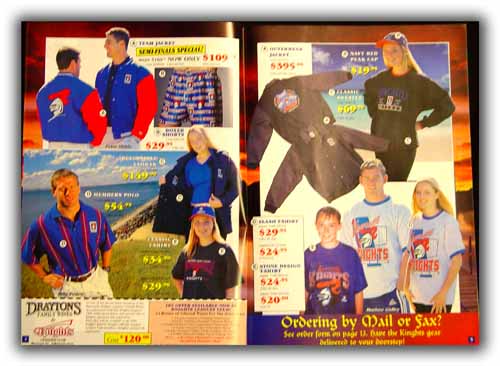