John came up with new innovative Bingo versions to capture the public’s imagination.

Whilst the Christmas vacation season is traditionally a busy one for Video and DVD rentals, it is also a period when consumers have little regard for loyalty and therefore rent their entertainment from numerous video chains. (ie: Blockbuster, Civic Video, Network Video, etc.)

Video Ezy wanted to stimulate loyalty and repetitive visitation and subsequently gave John the challenge of developing a marketing concept which would achieve both aims. 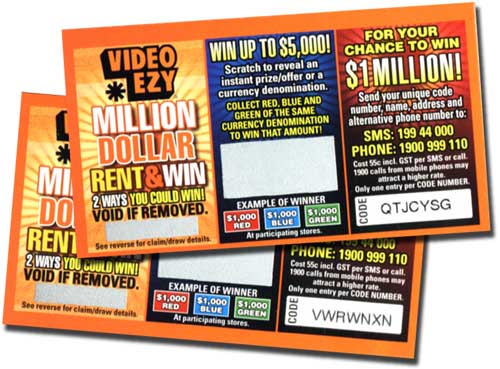 After discussions with Video Ezy senior management, John proposed a national Scratch Ticket Promotion – but one with a difference!

John highlights “Video Ezy Management liked the idea of a scratch ticket promotional concept as they had experienced success with scratch formats in the past. However, in order to really inject some “wow factor” into the equation, I proposed the potential of a $1 Million major prize! This certainly caught Video Ezy Management’s attention, that’s for sure!”

What John proposed was a $1 Million major prize, where the major giveaway would be insured and the “final draw” contestant would choose 1 of 250 DVD cases at the $1 million prize draw. One of the 250 DVD cases contained $1 million, with the other 249 cases containing $10,000 cash.

The scratch game was very simple. Customers received a $1 million rent & win scratch ticket with every video or DVD hire. (ie: Hire 3 movies and receive 3 scratch tickets). There were 2 ways to win on each ticket. In the first instance, the consumer scratched a latex panel to reveal either an instant prize or a currency denomination in a particular colour. If a consumer collected all 3 colours (red, blue and green) of the same currency denomination, he/she won that amount in cash!

On the second part of the scratch ticket, a unique code was printed. Consumers were invited to enter for their chance to win $1 Million by phone or S.M.S. Consumers simply needed to quote the unique code number from their scratch ticket. One person would be drawn from all entries to have the chance of winning the $1 Million cash!

Specific trading results are confidential, but brisk business over the all-important Christmas/holiday period was proof that “repetitive trade concepts” such as this, can stimulate additional trade over lengthy periods.

Let’s face it, if someone had the red and green $5,000 currency notes (after scratching their ticket panels), they were likely to continue returning to Video Ezy looking for the elusive blue $5,000 note. And additionally, the bonus of having the potential to win $1 Million by entering as many codes as one could, greatly contributed to spiking revisitations from customers.
(ie: The more rentals a customer purchased, the more “unique codes” he/she received for the $1 Million Draw.)

John highlights “It is always important with these type of marketing events, to reward consumers proportionately to their purchase levels. In this case, the number of scratch tickets you received was linked to the number of rentals you purchased. Hence, customers are rewarded on a proportionate basis to their spend.” 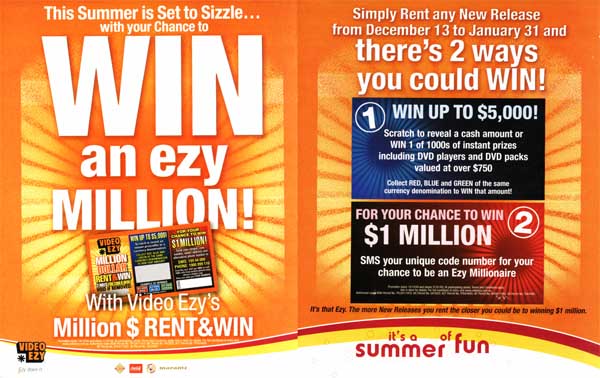