One of the more unusual industries John has been involved with is the “turf” business – in other words, the “lawn” industry.

John was requested by Australian Lawn Concepts, one of Australia’s larger turf farms, to put together a strategic marketing plan.

ALC is located at the base of Mt. Tamborine on the Gold Coast in Queensland.

After spending considerable time with owner, John was able to deduce that the two primary target customers were:

b) Homeowners, particularly in new areas.

He therefore proposed both short & long-term marketing strategies for each of these markets.

In the case of Landscapers, John produced an innovative Direct Mail Campaign which featured an offer “too good to refuse” for most thirsty male landscapers!

ie: For every purchase of 500 sq mtrs of turf (about 1 regular home’s worth), the landscaper would receive a FREE CARTON OF CROWN LAGER PREMIUM BEER!

After gaining a database of over 500 landscapers in the Gold Coast/Brisbane area, the plan was to mail a brochure and personal letter to each. As you can see from the A4 size brochure featured on this page, the FREE BEER OFFER was certainly “highlighted” as a unique offer – immediately creating a “unique selling point” for ALC. 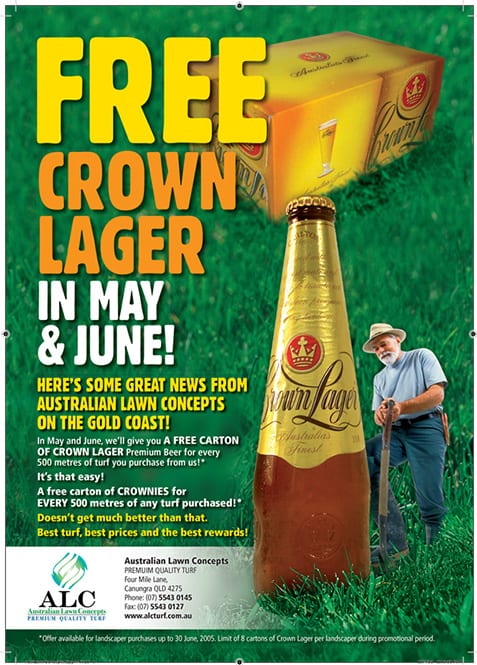 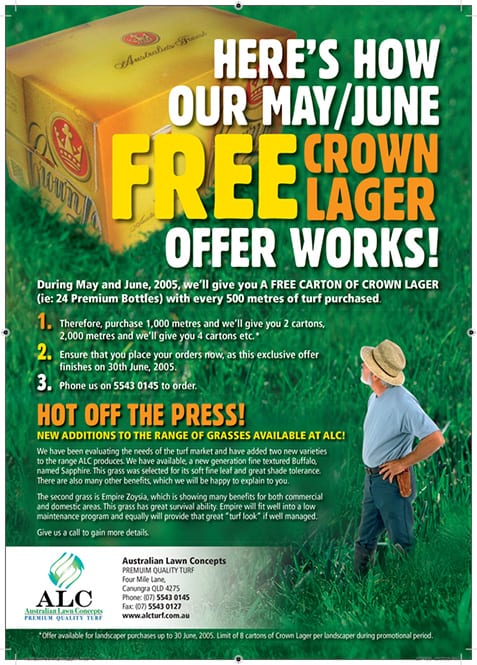 This A4 Mailer generated a spectacular response from thirsty landscapers!

The interesting thing about John’s “wow factor” for this industry was that the value-add incentive was in no way related to the actual “turf product”.

“What’s beer got to do with grass” you might ask?

John explains, “given the capacity of landscapers to order volume turf, we needed to provide them with an incentive which rewarded them personally. And then we needed to link the giveaway with a particular volume (ie: 500 sq. mtrs), so that we’d stimulate repeat purchasing and ongoing loyalty.”

John goes on to explain “the most successful value-add promotional concepts usually have a giveaway which is completely unrelated to the actual product being sold.” (eg: McDonalds Disney toy with the Happy Meal hamburger, Woolworths Petrol Discount, John’s own concept of the Free Holiday with a Home Loan for the Greater Building Society etc.)

John’s intention was to take the emphasis away from price, so that ALC retained its proper margins. And what better way to distract a landscaper! FREE BEER!!

In the case of new homeowners, a Direct Mail brochure was designed for ongoing distribution to “new areas”, where houses had just recently been built. 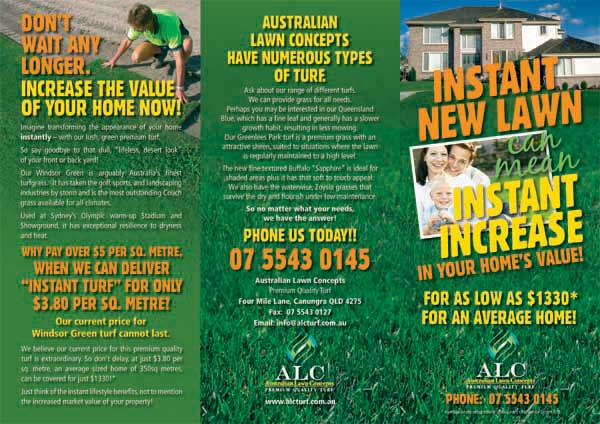 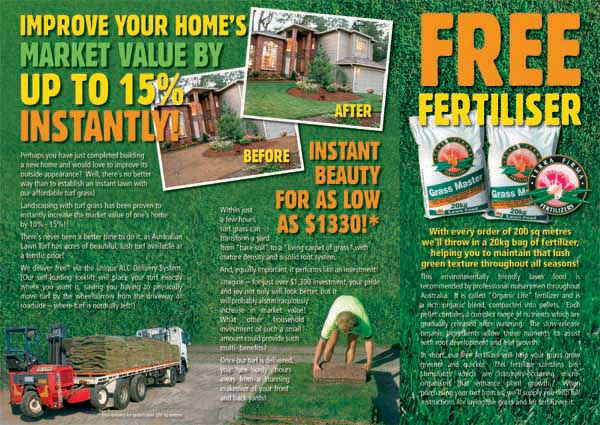 DL size 6 panel brochure which was letterbox delivered to areas with new homes. Click to enlarge.

John’s research was able to uncover a very powerful statistic, where analysis from the U.S.A. had indicated that by laying new turf, homeowners immediately increased the market value of their home by 10 to 15%!

The idea was to influence homeowners that new turf would be a far more sensible investment than perhaps alternatives such as lounges or other home furnishings. (We all know that “turf” is not considered an urgent necessity for most new homeowners, so it was John’s job to convince people otherwise. And if people could be alerted to the instant increase in their home’s value due to a new lawn, it might just sway their preferences to turf versus home interiors.)

A value-added giveaway of free fertilizer was also offered, for every 200 sq. mtrs of turf ordered. So, once someone was convinced that they could instantly increase their home’s value by laying new lawn, John ensured that they chose ALC because of numerous features, one being free fertilizer.

In order to help homeowners recognise how inexpensive “turf” could be, John included an “average home price indication of $1,330” in the brochure. The idea was for a homeowner to say “Wow, I can instantly increase the value of my property by tens of thousands of dollars, in return for a small investment of just $1,330!”

How on earth could any homeowner not be excited by such a massive “return on their investment!” 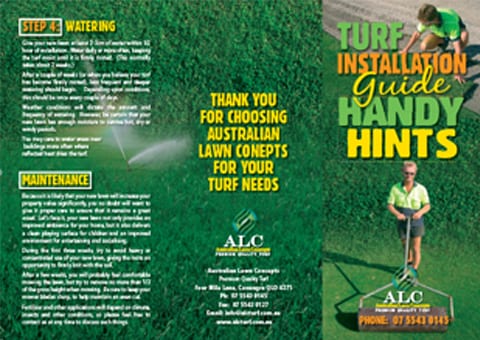 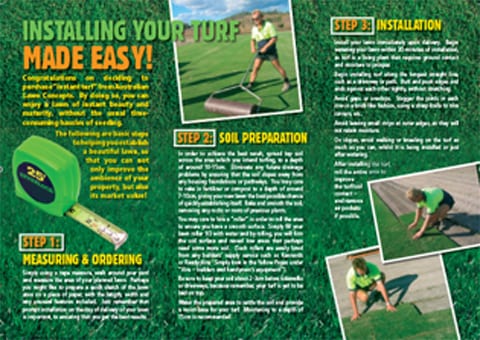 John also produced a Handy Hints brochure for Homeowners who chose to lay their turf themselves.

The results of these campaigns were staggering. After mailing less than 50% of the 500+ Landscapers Direct Mail Offer of Free Beer, Australian Lawn Concepts had to delay further mailings due to delivery congestion!

The company couldn’t keep up with landscaper demand!

Landscaper response to the “Beer Offer” was astounding, with sales going through the roof, not only due to original orders, but also due to repeat orders!

Owner of ALC, John Kelleher, said “I was absolutely blown away. We could hardly keep up with deliveries – which is a nice problem to have, I might say!”

The Homeowners Direct Mail Campaign also met with instant response and its success has now provided ALC with a marketing template for consumers all year round. Once again, a bit of creative flair and some “wow factors” combine to create instant and constant sales.