Newspapers – Attack of the Dinosaurs

Through the appeal of dinosaus at the time, John created record newspaper circulation.

Before Steven Spielberg’s Jurassic Park roamed the silver screen of the cinema world, John launched his “Attack of the Dinosaurs” Album and Stickers promotion through the News Limited newspaper group around Australia.

The year was 1991, some years before Jurassic Park hit the big screen – and after spending some time in the US studying “pop-culture marketing”, he returned to Australia with a number of continuity promotional ideas, one of which revolved around the ever-popular subject of Dinosaurs.

John recalls the stimulus for the idea, which came about as a result of him attending a “Dreaming and Doing Conference” in Walt Disney World in Florida. John recalls, “in one of the seminars during this week-long conference, one of Disney’s Imagineers, their title for their creative team, was lecturing the participants about the fundamentals of popular entertainment which appeals to the masses.” 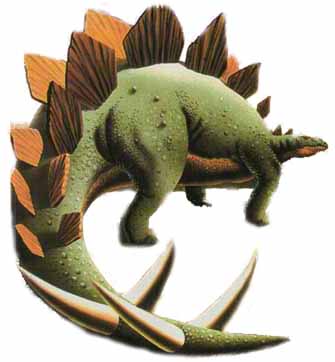 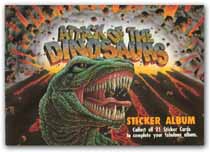 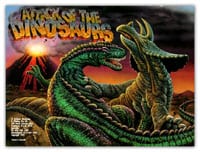 Front and back cover of the spectacular sticker album. Click for PDF version. (Please allow 30 seconds or more for download.)

John recounts, “I then asked the Disney Imagineer if he could put his finger on a number of themes which seemed to be evergreen winners?” In other words, John was blatantly asking the Disney lecturer to provide him with themes that Disney always seemed to make money from.

The Disney Imagineer kindly responded by explaining that in his view, perpetual winning themes included:

Then, after pausing for a second or two, the Imagineer exclaimed “Oh, and there is one more “no-brainer theme” which always seems to make money – and that’s DINOSAURS!

Keep in mind that this was before Spielberg had even released any minor details of Jurassic Park. John took this important piece of information and upon returning to Australia, decided that the age of the Dinosaurs needed to be resurrected, but this time in an exciting and educational way.

He approached News Limited with this continuity concept of an Album and Stickers collection and the company ran with it in all States of Australia. (NB: “Continuity” was the term used in the Sales Promotion Industry, to describe marketing concepts which stimulated repetitive trade.)

After doing his homework and determining that the subject of “Dinosaurs” was on every school’s curriculum, John decided that the Album and Stickers concept not only needed to have a theatrical touch, but that it should also be educational.

Therefore, he employed the services of a Researcher who provided all of the relevant details about Tyrannosaurus Rex and his friends – and a brilliant illustrator by the name of Christer Erickson who brought T-Rex and his pals to life in a stunning and theatrical way.

John realised that in order for this project to be a success, newspaper readers needed to immediately recognise the fantastic value this special newspaper offer provided – and therefore he ensured that the artwork was mesmerising.

1. A 20-page A4 landscape Sticker Album, which provided Dinosaur facts and spaces for all 36 Dinosaur Stickers.

The promotion launched with a large television and radio campaign by News Limited, inviting consumers to buy the Sunday newspaper and receive their first Dinosaur Sticker Card for free!

The beautiful glossy 20-page Sticker Album was available at all newsagents for just $3.95 (incredible value given that any comparable albums in retail stores would be $10 or more!). And readers were invited to purchase the Daily newspaper each day for 3 weeks to cut out the “Attack of the Dinosaurs” tokens. Readers needed to take each token to their newsagent together with 60 cents to redeem one of the 36 Sticker Cards.

Under John’s advice, News Limited took full advantage of the fact that Dinosaurs were part of the school curriculum – and therefore mounted a successful campaign in influencing school teachers to encourage their students to collect the Album and Stickers. (Good old “pester-power” at work again!”)

Over 120,000 Albums were sold, making “The Attack of the Dinosaurs” booklet Australia’s Number One selling book in 1991. (Keep in mind that a print run of 30,000 or more books is very rare in Australia).

Over 2.4 million Dinosaur Sticker Cards were sold, once again eclipsing the sales for any unlicensed Sticker product in Australia’s history. (“Unlicensed” meaning a non-Disney or non/licensed movie theme).

The promotion was so successful that John received interest from overseas fast food chains and retailers, who were interested in running the promotional concept as a sales stimulus for their business.

Just goes to show what happens when you mix a sprinkle of “wow factor” with an evergreen winning theme such as Dinosaurs! 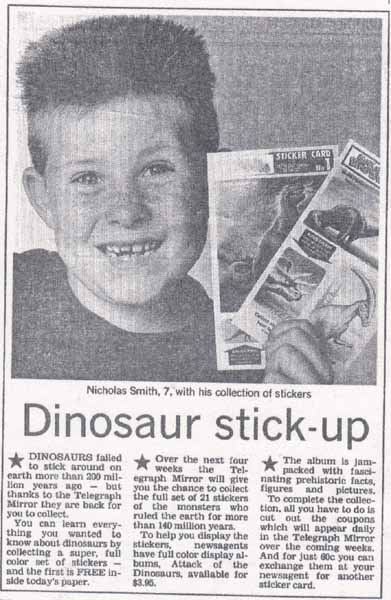 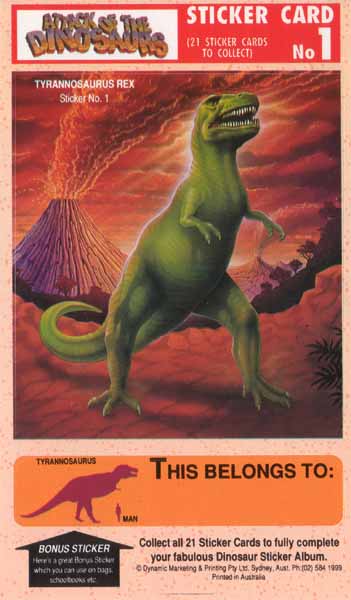 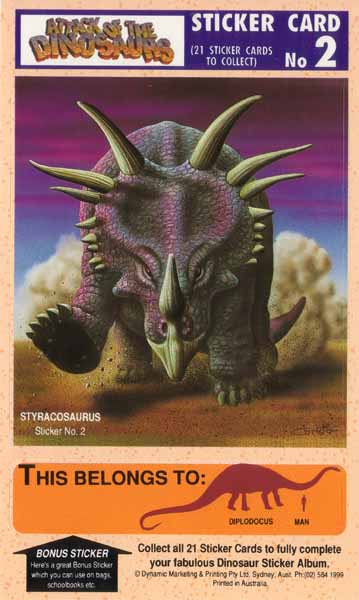 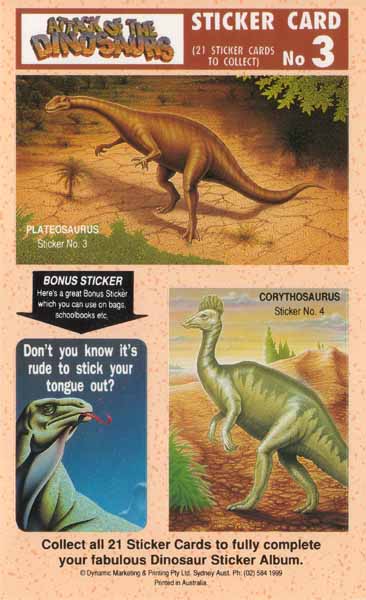 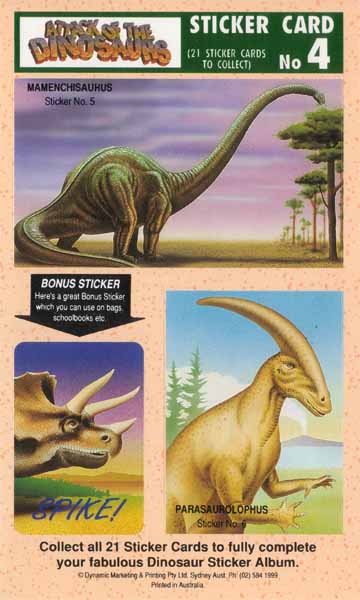 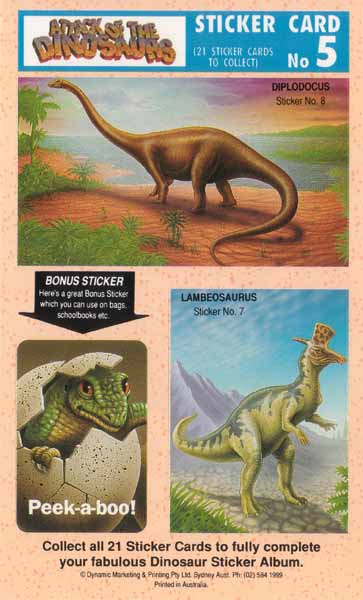 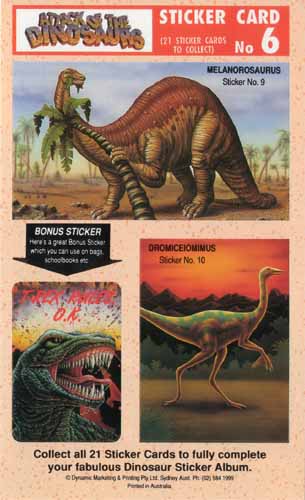 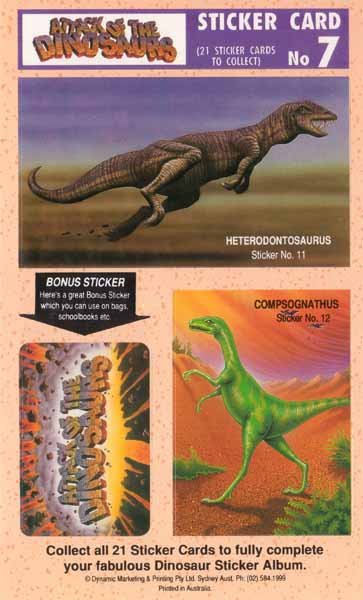 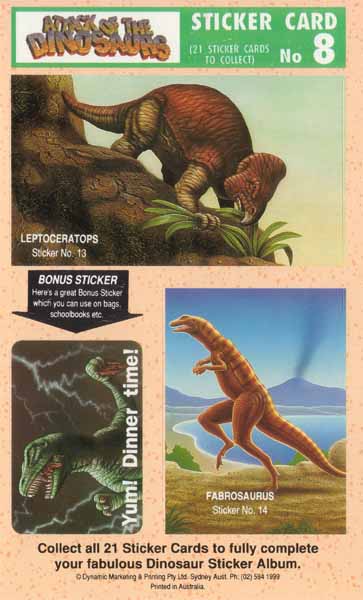 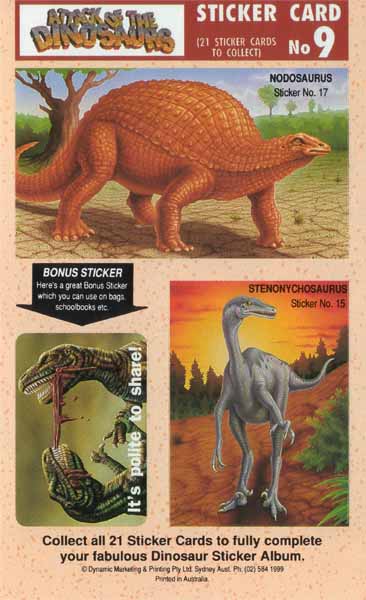 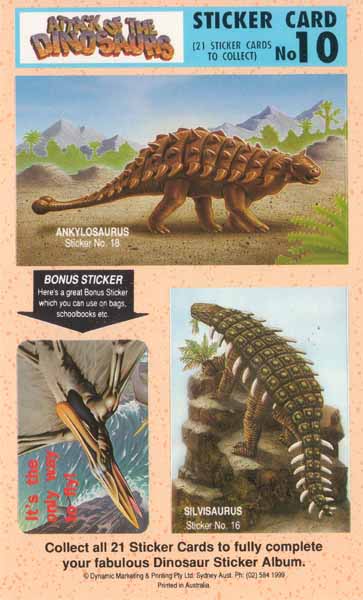 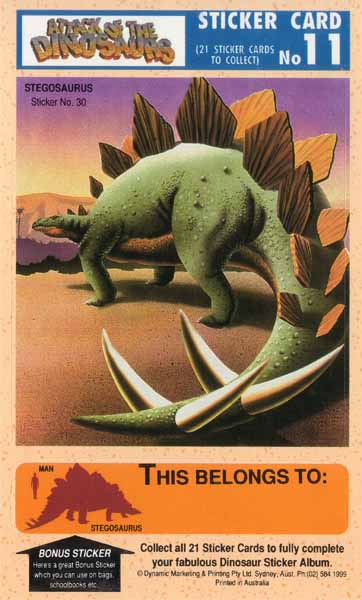 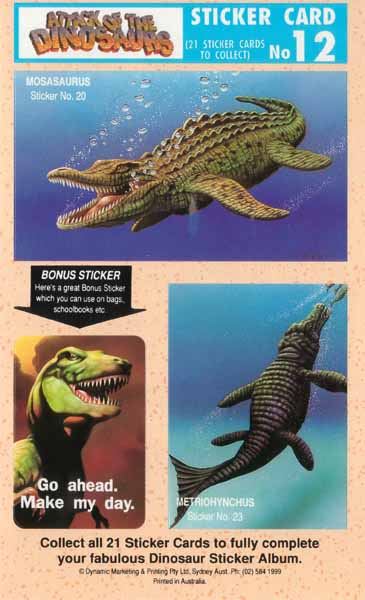 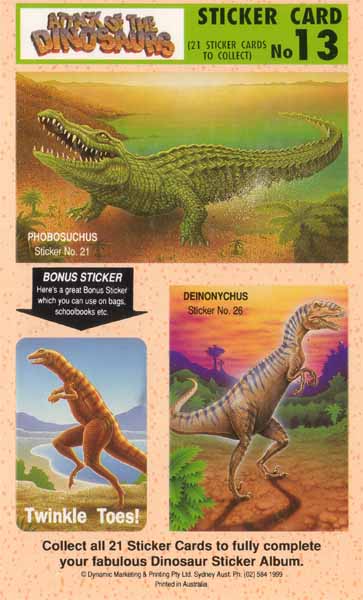 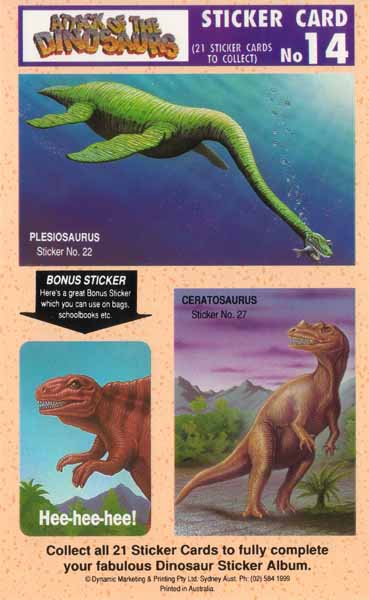 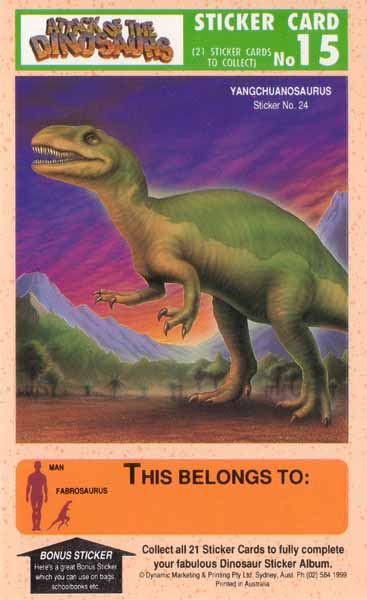 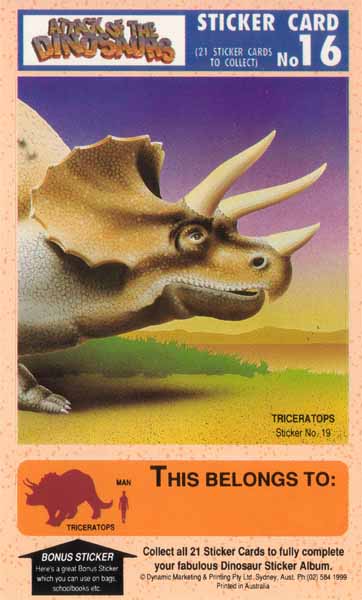 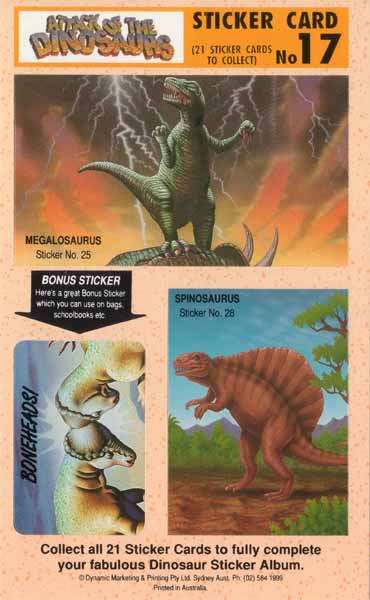 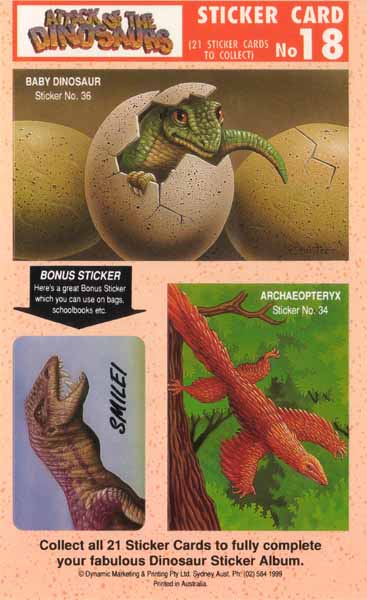 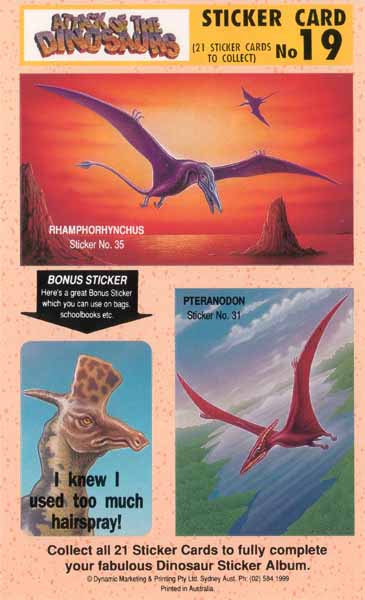 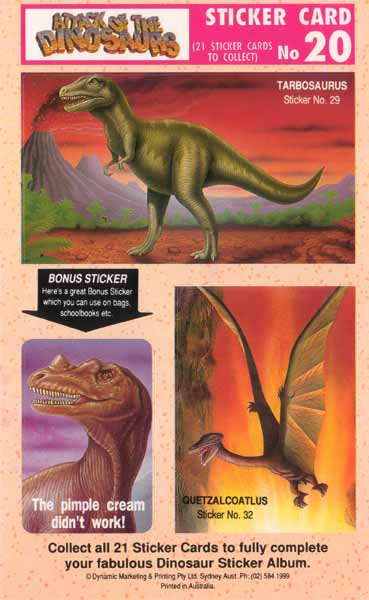 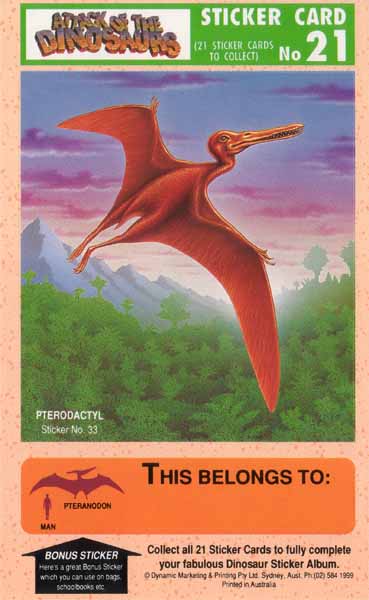